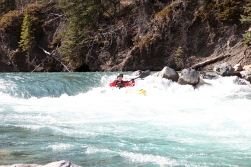 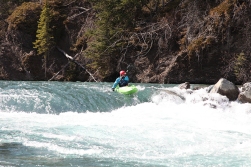 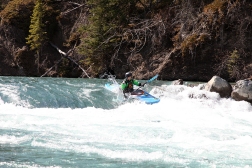 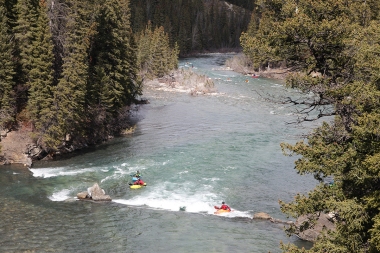 The unusually warm winter and early spring conditions have led to an early start to the kayaking season on the Kananaskis River, although for those that are truly hardcore, it never really ends and they paddle all year round. I am not that hard-core… yet.

This was not my day for adventure on the water, I need some warm up runs on some smaller water first. This was my day to watch, my day to see how others do it, my day to learn from watching what others do rather than swimming. It’s too cold to learn by swimming.

The paddling community is so AWESOME and so supportive, it is hard not to get sucked in.   Having joined one of the local clubs last year, this enabled us to get out and paddle as much as we could, this was often a couple of times a week at a minimum. It also helped us to grow our skills and confidence and to learn that no matter how bad you think that swim you just took was, it was still AWESOME.

Towards the end of last years paddling season I went out to the Kananaskis River for my second run down the river with some friends and fellow club members. My first run down the river a few weeks before had been awesome.I expected this run to be no less awesome, I may have even been feeling a bit cocky.

I made it down the river about a quarter of the way or so and we were playing in some eddies and I was doing pretty well, or at least I thought I was until I came out of an eddy with not enough speed and went over.  At this time I didn’t have a roll and I am not terribly great at waiting for a “T” rescue, so I swam.

With the help from others I was able to get myself, my boat and paddle to shore to drain out my boat and get back in. After talking with my rescuers about what I had done wrong coming out of that eddy, I was informed that everything was AWESOME and we got back in and headed down river.

After stopping at Point Break for a surfing session, in which I watched the more experienced members of our group surf their kayaks in a hole, we started to make our way down to Santa Clause.  On our way down one of the group members asked me if I wanted to try doing Santa Clause this time, he was confident that I could do it. I said yes, what’s the worst that could happen, I would swim.

After missing the nearby eddies to take out it we were forced to use a super awkward eddy a little ways down from the feature. While we were working as a team to empty my boat, in said super awkward eddy, we discussed what went wrong when I came down Santa Clause, turns out I celebrated to early and didn’t have an active paddle in the water and  let go of my aggressive position in my boat. After our talk and my boat had been drained, I got back in and was told that I was doing AWESOME and that there is nothing wrong with swimming, everyone swims.

I made it down the first part of the Race Course without incident,  we stopped in an eddy and waited for some rafters to come down, where I was once again told that that was AWESOME and I was cheered on by my group.  We began to head down again after the rafters had passed and we stopped to talk to some people along the side of the river before continuing down. I took this time to turn my GoPro around so what it was facing me and big smiling face.

We set back out into the Race Course to meet the others in our group towards the bottom. They were waiting for us in an eddy, so we eddied out to join them in the long narrow eddy. As I made my eddy turn I dropped my edge a little too soon, and ever so slowly, started going over. I heard one of the group members telling me to hold on for a “T” rescue as I went down into the cold water,  my legs fell out of my leg braces and popped my skirt. There was no hope for an in boat recovery after this happened so I completed my wet exit and tried to get out to shore.

The eddy we were in was fairly narrow and very deep, so I was unable to touch the bottom of the river to aid myself in getting out. The guys were wrestling with my boat trying to get it to a better spot to get out, when they suggested I let go of my boat and let them handle it. Then I could work on getting out.  As soon as I let go of my boat I was flushed out of the eddy by the river current and was going down the remaining portion of the lower Race Course, without my boat!

I knew that there wasn’t going to be anywhere for safe rescue anywhere close, so I got ready for a long swim. I pulled my feet up and focused on keeping them out of the water or as close to the top as possible, while doing my best to keep an eye on my surroundings and listen for instructions from my group.

When I heard them yell at me to swim to the left, I would and when they told me to stop, I would resume my safety position with my nose and toes in the air.  One of the guys made it to me to help me swim into the next eddy, when he got to me he told me grab the back of his play boat and swim in. As I grabbed the back deck of this boat I could immediately feel him begin to roll, so I let go; however I was still too close and caught the back edge of his boat in the mouth. As he rolled up he went over a small feature into the next eddy, I followed behind him with my nose and toes in the air. As I went over the drop I hit a rock along the bottom of the river with my tailbone and grunted out a loud ouch.

Out of danger, for the moment, I let my body relax and float to the surface of the water. My  group caught up to me with my boat and paddle and got me to the edge of the river. After ensuring that I was okay and had all my gear, I was promptly told how AWESOME that swim was.

A few weeks later I was back on the upper Kananaskis for another AWESOME run, with AWESOME people.